We're here for you.

We still believe insurance is about people.

Our clients matter to us.
Finding the right insurance can be challenging. Navigating an emergency or chaotic situation can be very difficult. That’s where we come in.

We’re here for you.
Our reputation as an exceptional service provider for generations means that you can trust West Wawanosh Mutual Insurance Company with your needs. We’re here to offer security, safety and peace of mind.

Request a Quote
Find an Agent or Broker

West Wawanosh Mutual Insurance was established in 1879 by a group of farmers who believed that they were stronger together than individually. There was a very evident need for the farmers to insure their farms against the perils of fire and other companies were just not interested.

Those farmers formed a grass-roots organization and it was agreed the company would be called the West Wawanosh Mutual Fire Insurance Company. The head office was to be in Dungannon and seven Directors be elected for the current year.

Over the years, West Wawanosh Mutual Insurance Company grew to offer it’s policyholders exceptional farm, residential, auto and commercial insurance, but the belief that we are stronger together has remained the same. We are dedicated to helping our neighbours today, just as our ancestors did in the past.

As a member of the Ontario Mutuals, West Wawanosh Mutual Insurance holds a place in the top 20 farm mutuals in premiums written and we are proud to show an excellent level of security and stability through the accumulation of a sizable surplus.

Additionally, we are members of the Fire Mutuals Guarantee Fund, which guarantees the performance of companies who may have fallen on hard times and are backed by the strength of a solid reinsurer that is wholly owned by the farm mutual companies.

A progressive writer of approximately 1,300 Ontario farms, of all sizes, shapes and specialty, West Wawanosh offers a full range of quality insurance including Farm, Residential, Commercial and Automobile insurance.

We also offer a wide range of coverage that can be blended to make a suitable package for most clients. These products are further complemented by the broad coverage available for homes, cottages and other residential properties.

We believe in working to support thriving communities in rural Ontario. Our agents, brokers, directors and staff are your neighbours.

We believe in cooperation and self-reliance.

According to an advertisement, a meeting was called for December 20th, 1878 at the Township of West Wawanosh Council Hall, as to whether it was expedient to organize a Fire Insurance company upon the Mutual Principle. It was moved by John Baillie and seconded by Edwin Gaunt that the meeting be in favour of organizing. Of those in attendance, 70 voted yeas and 12 voted nays. It was moved b Edwin Gaunt and seconded by James Rose that James Johnston, John Baillie, Charles Durnin, Edward Smith McLean, Robert Murray and Archibald Anderson be a committee, with powers to add to their numbers, to take subscriptions from owners of property as to the amounts they will insure as required by the Revised Statutes.

It was agreed the company be called the West Wawanosh Mutual Fire Insurance Company, the head office to be in Dungannon.

The Company directors were the agents and the company commenced business May 1st, 1879.

Here are some interesting bits about us through time.
1879 - Present 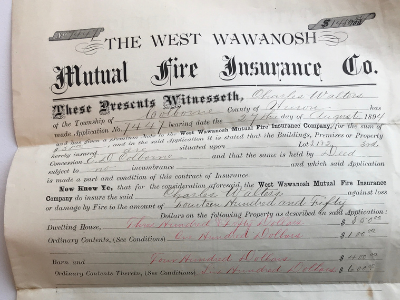 The Company directors were the agents and the company commenced business May 1st, 1879.
Risks accepted were farm property, churches and school houses situated out of the limits of a village survey. The board meetings were held in the Township Council hall on the first Tuesday of the month. 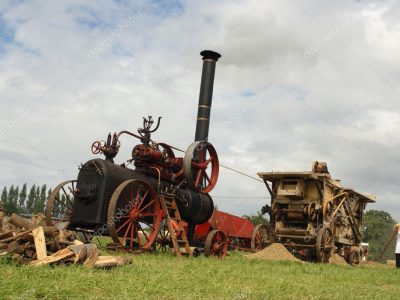 The introduction of steam engines for threshing caused great concern for the Directors and an additional fee was charged where steam engines were used. At the Annual Meeting of May 22nd, 1886, the Board of Directors was increased to nine members with three members retiring each year. Mr. Charles Girvin, was President of the company for the first nineteen years. 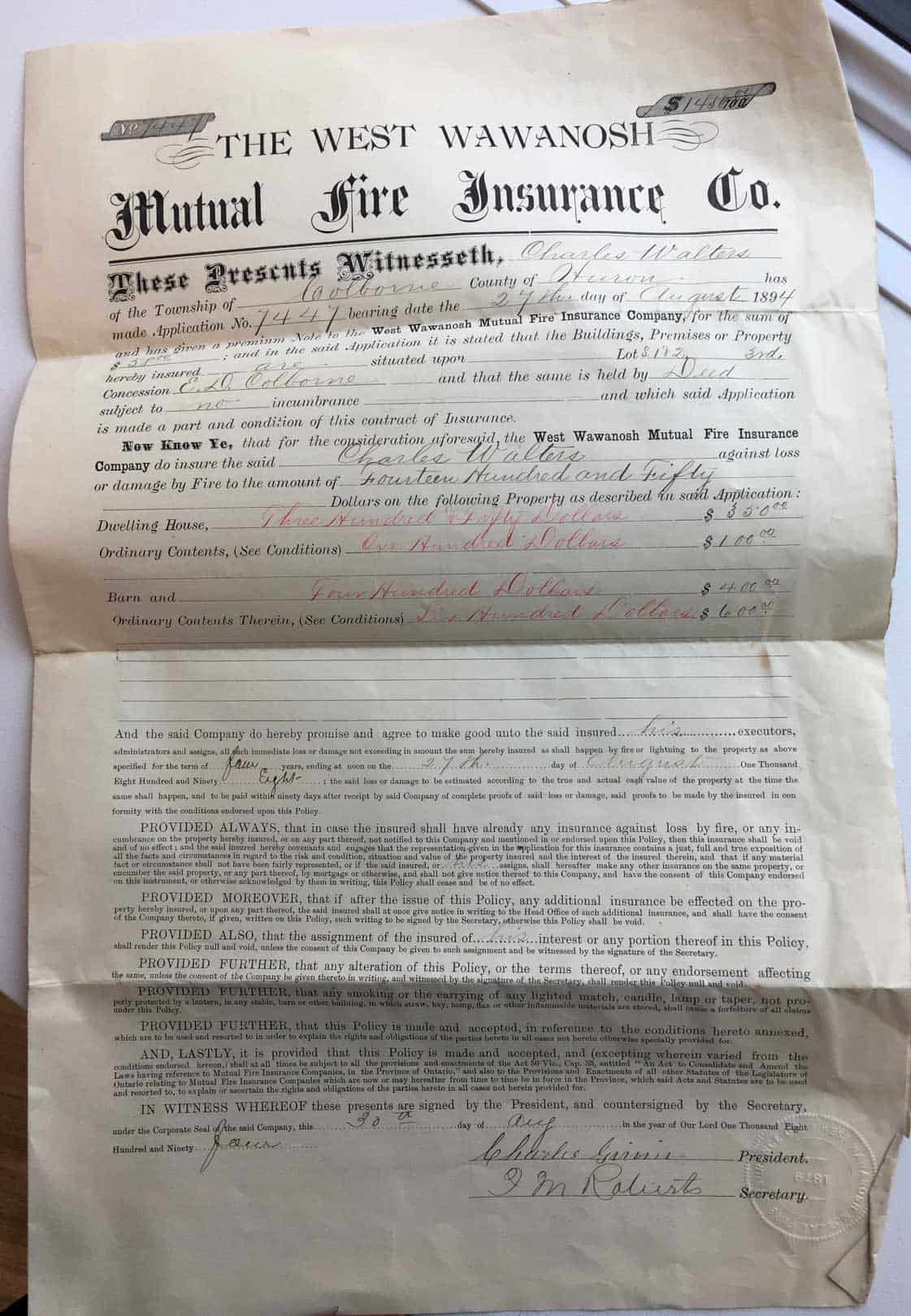 By the year 1900, the amount of insurance at risk had increased. At the Annual Meeting of February 2nd, 1916 districts were allocated for the election of Directors namely by Township districts a practice carried out for many years by the company. The company purchased the building from Thomas G. Allen for $2,500. Reinsurance was being shared with neighbouring Mutuals: Howick, McKillop, Hay, Dufferin, Elma and Usborne and Hibbert. 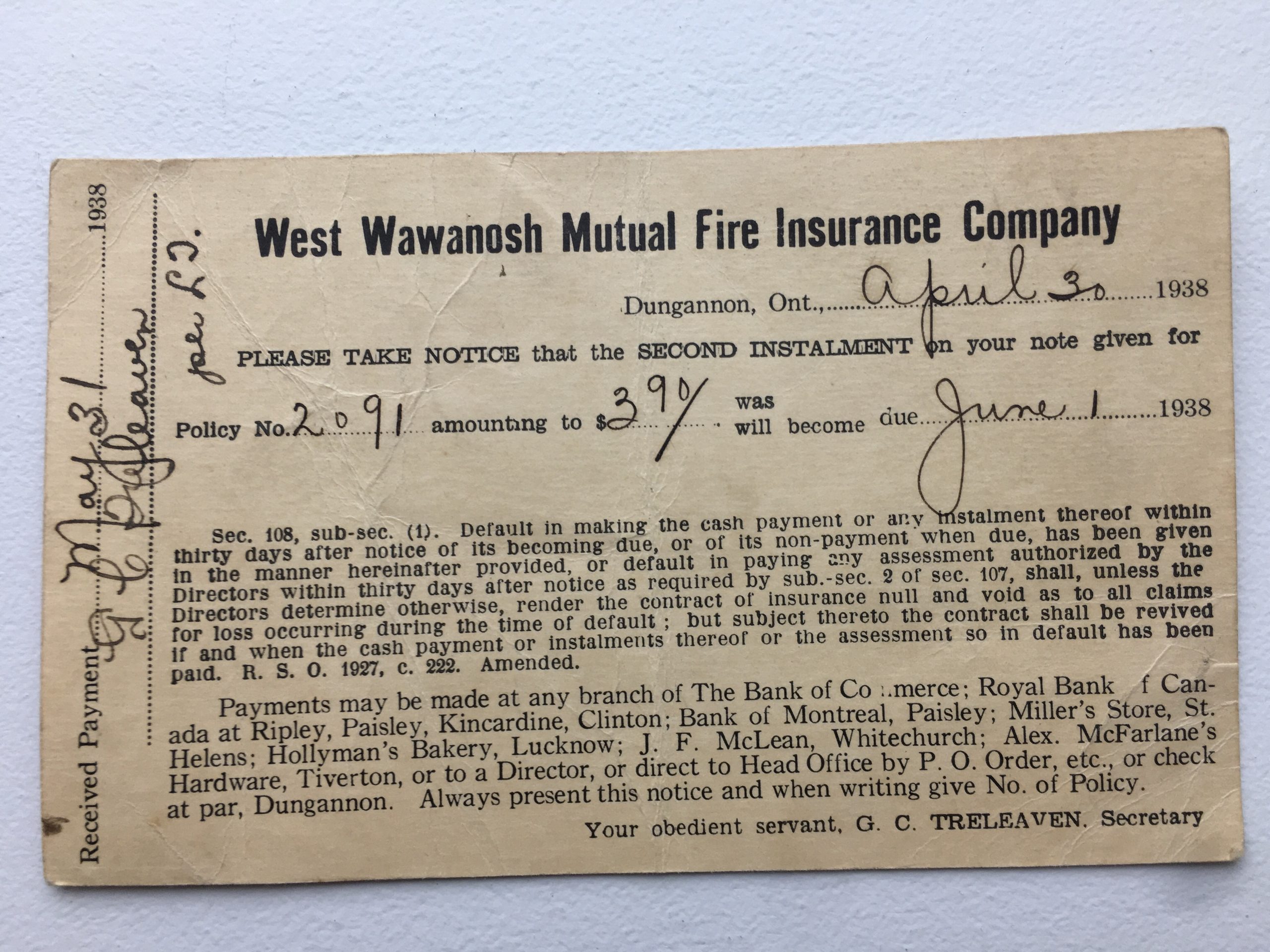 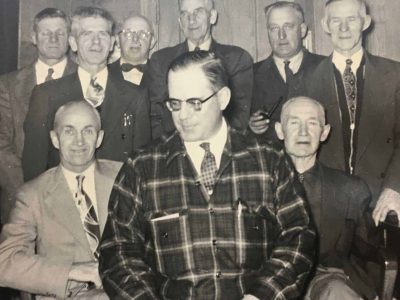 Early Board of Directors Photos 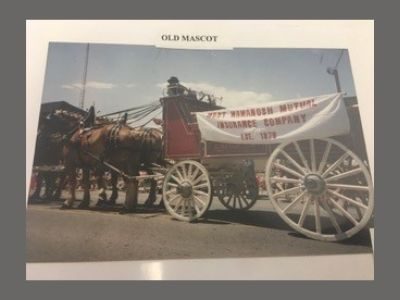 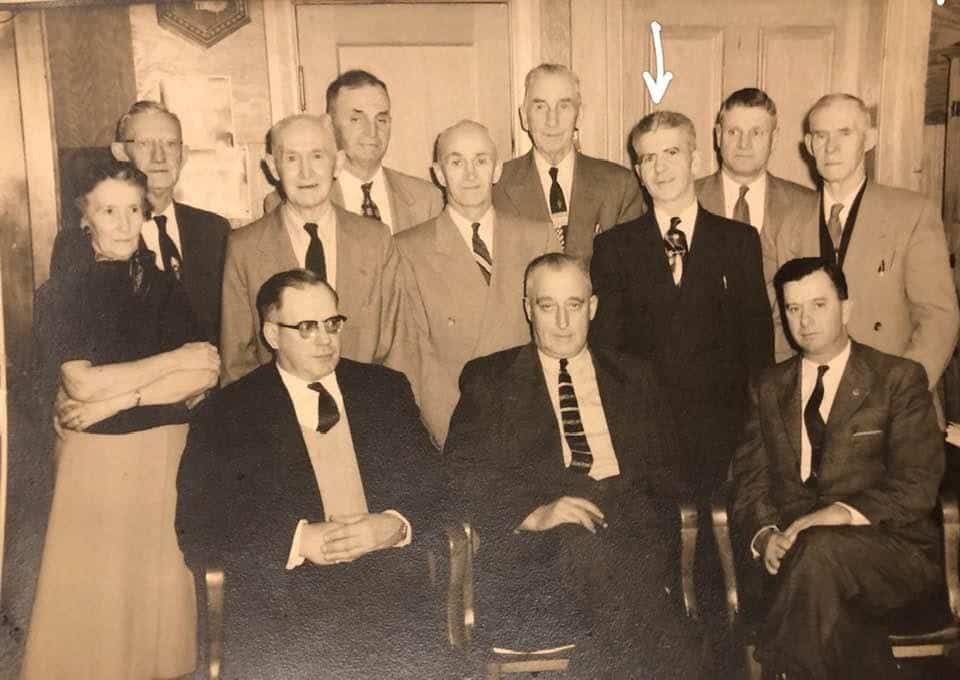 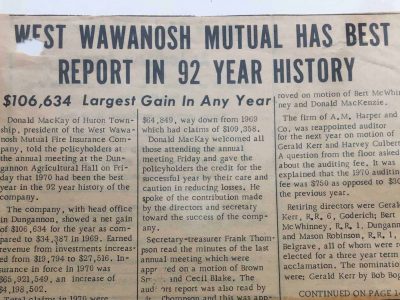 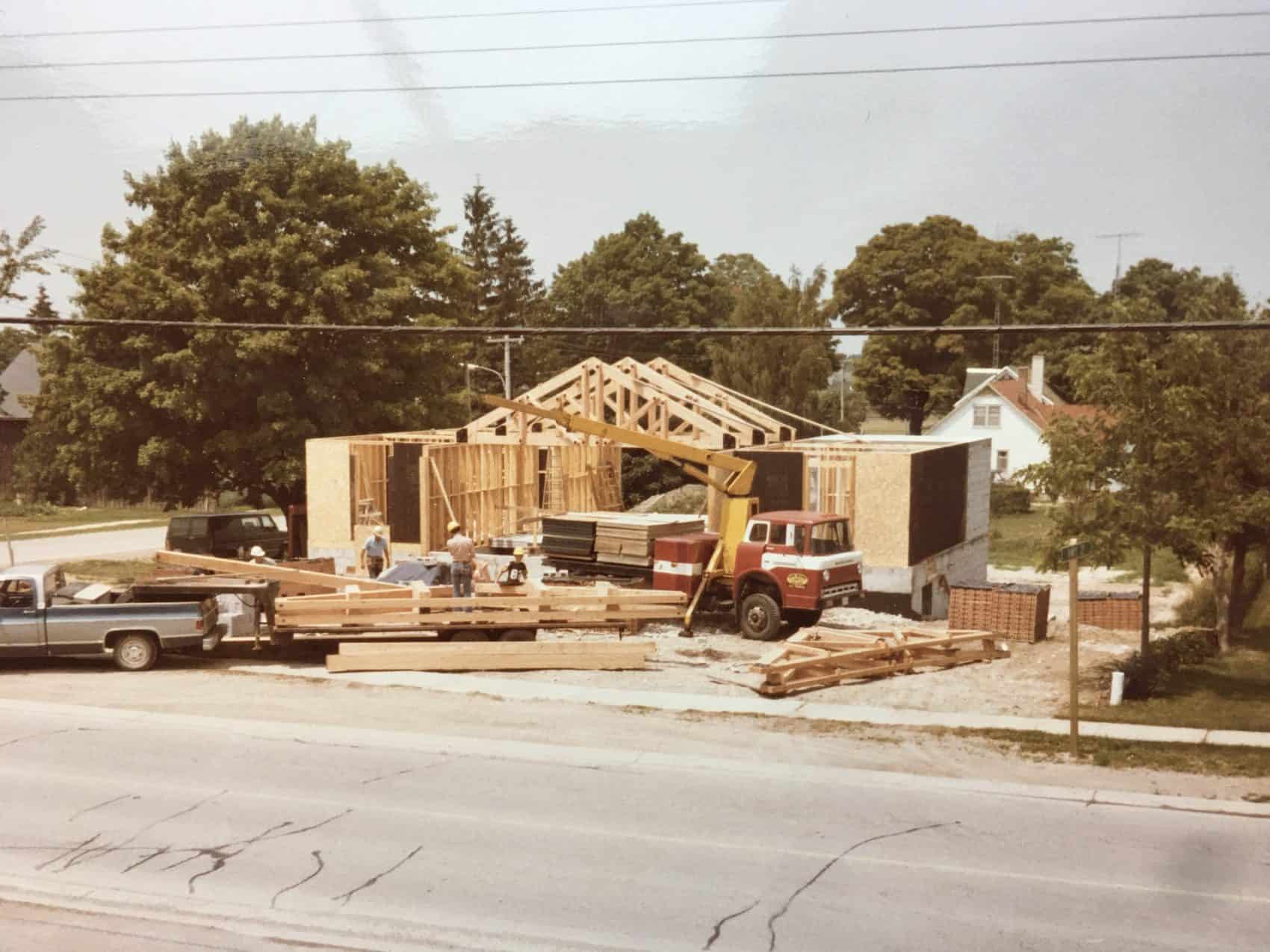 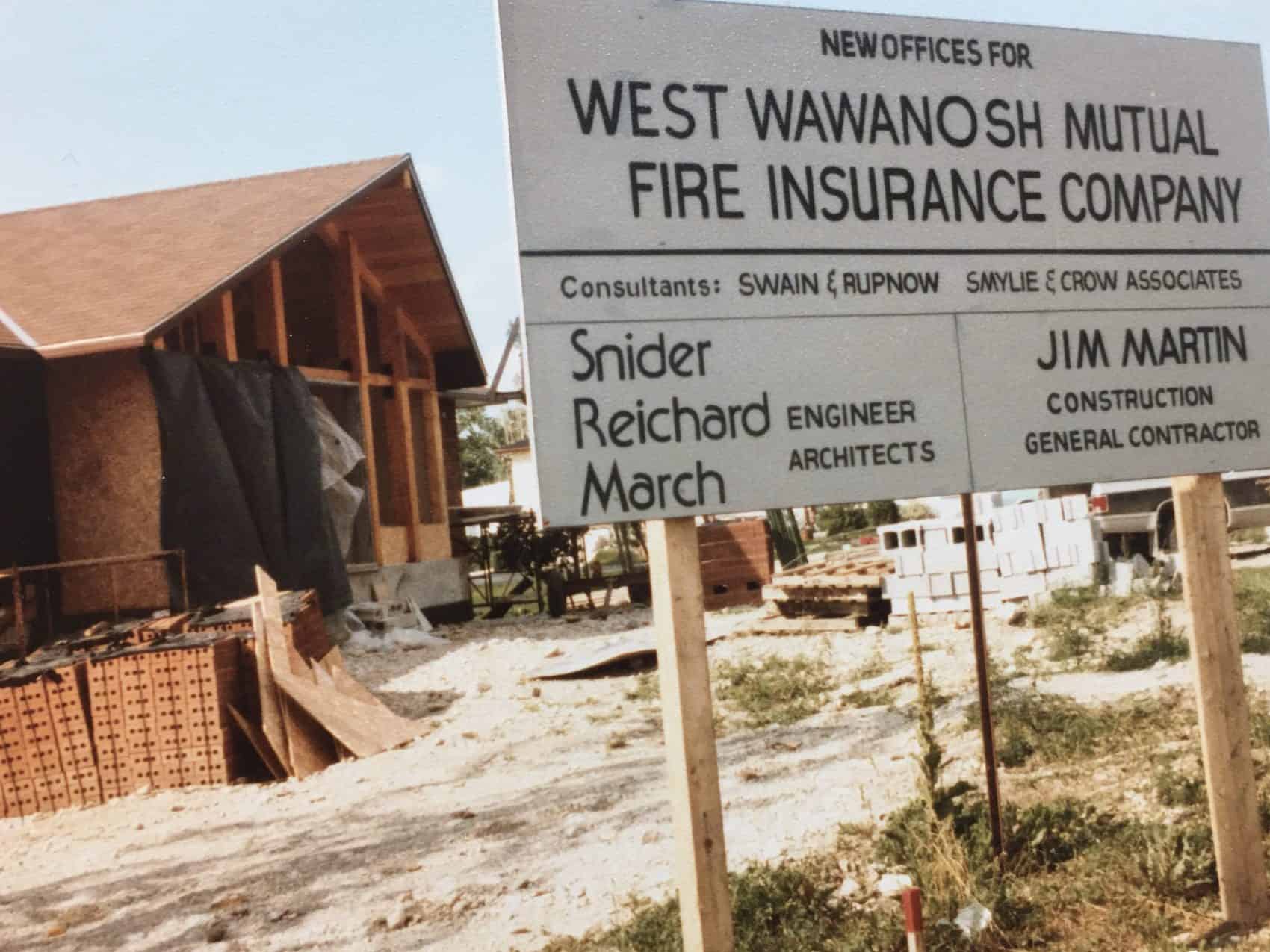 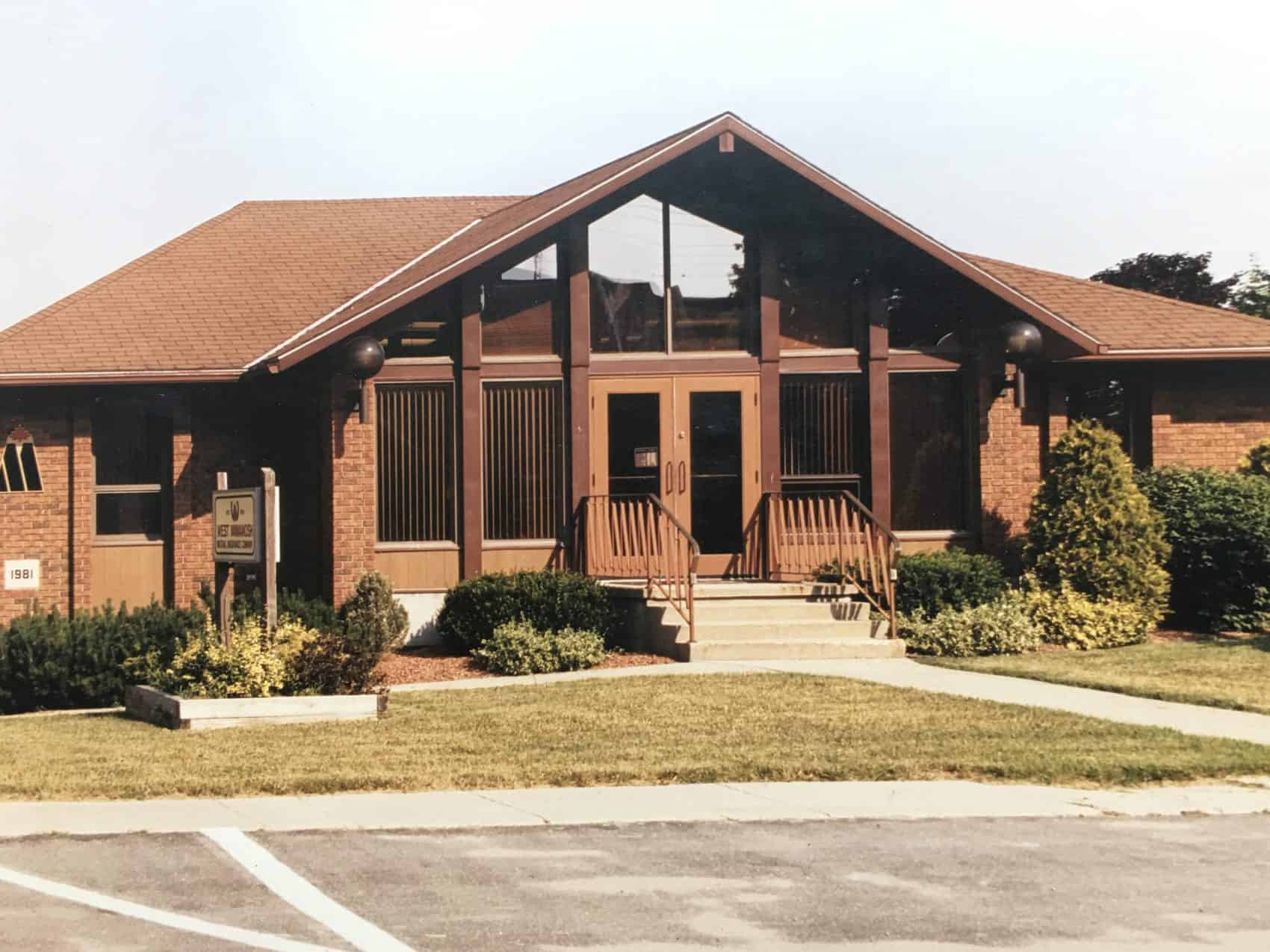 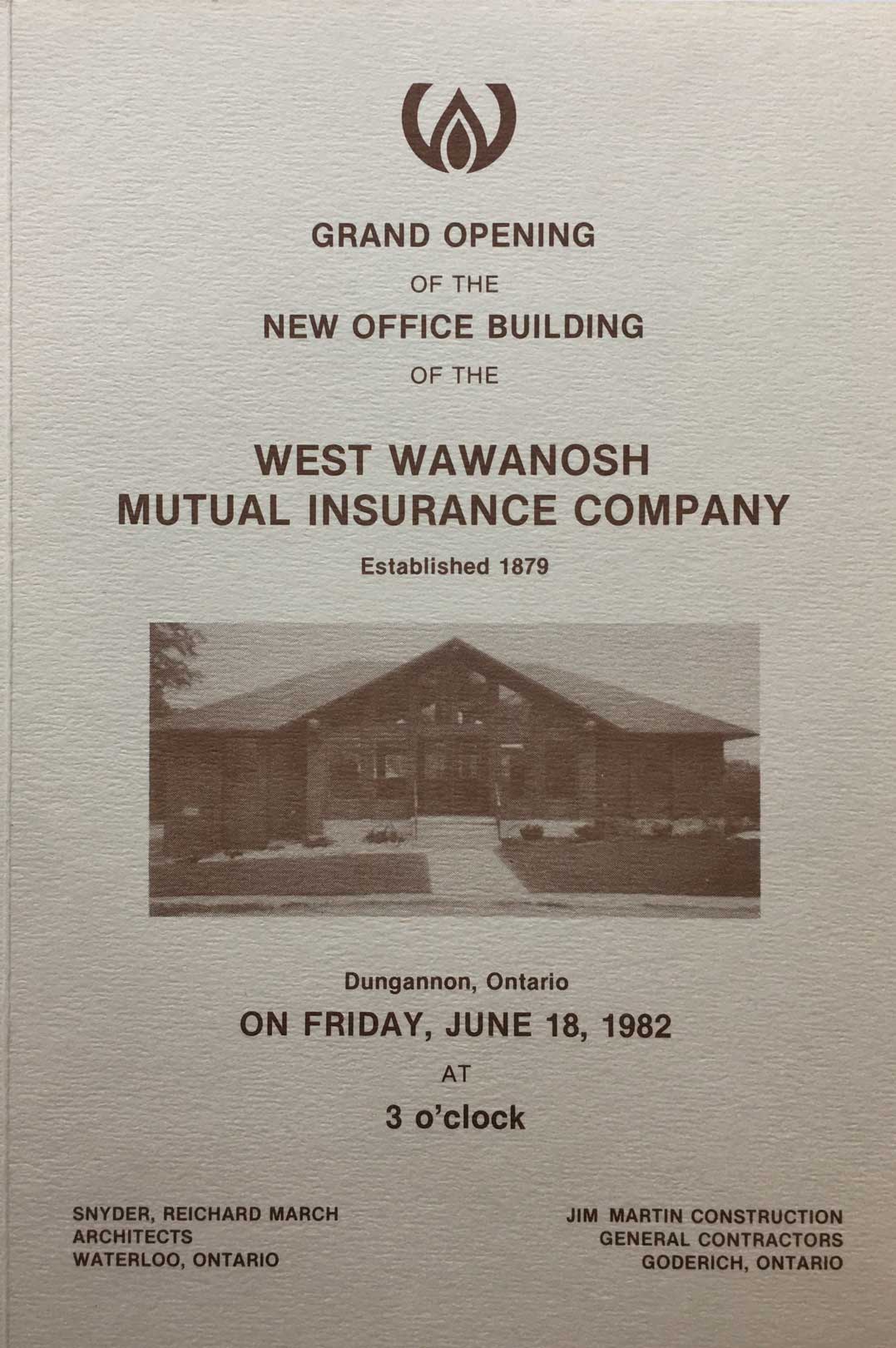 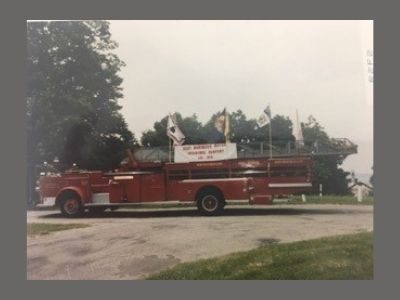 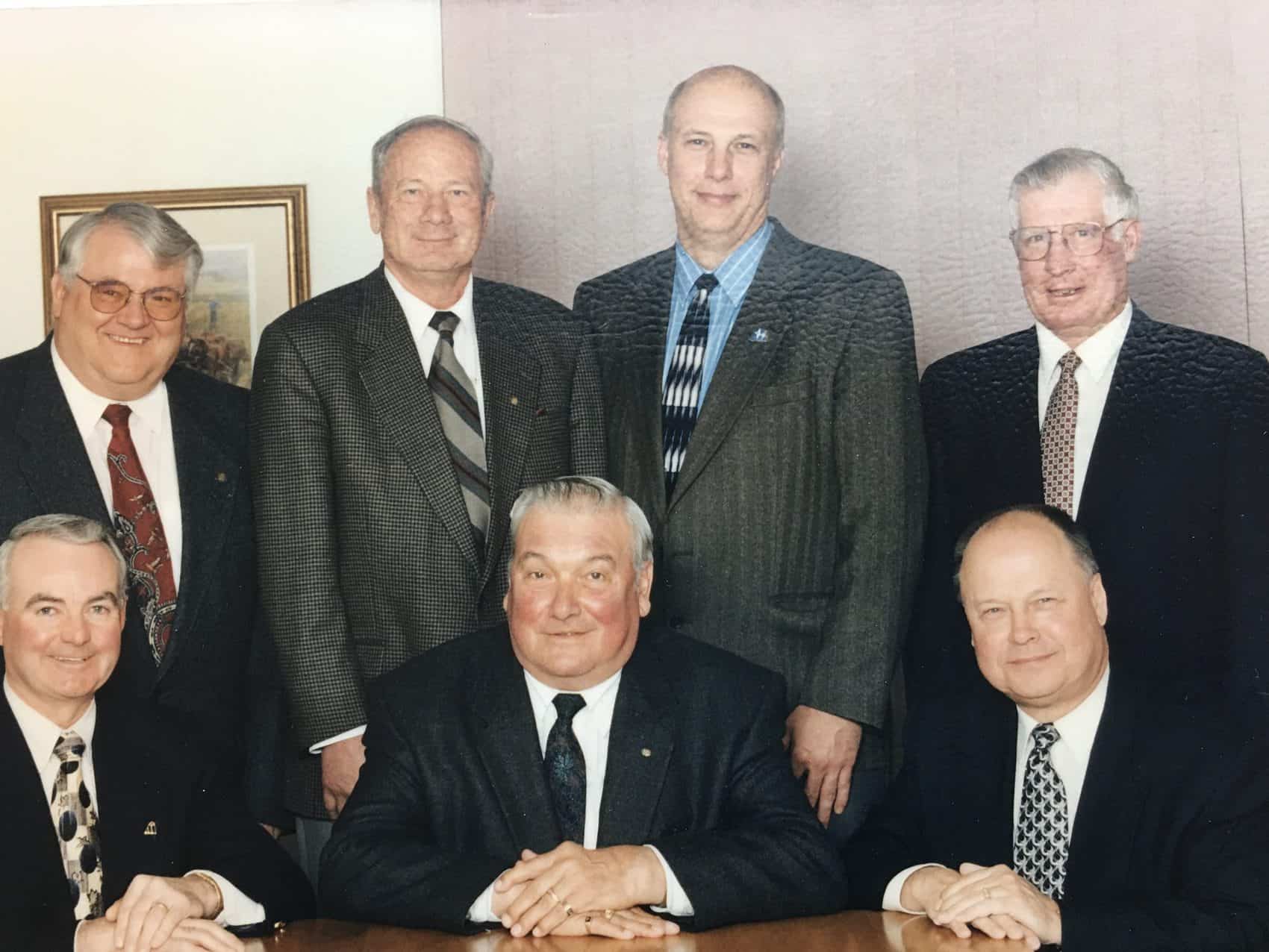 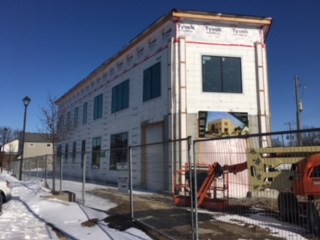 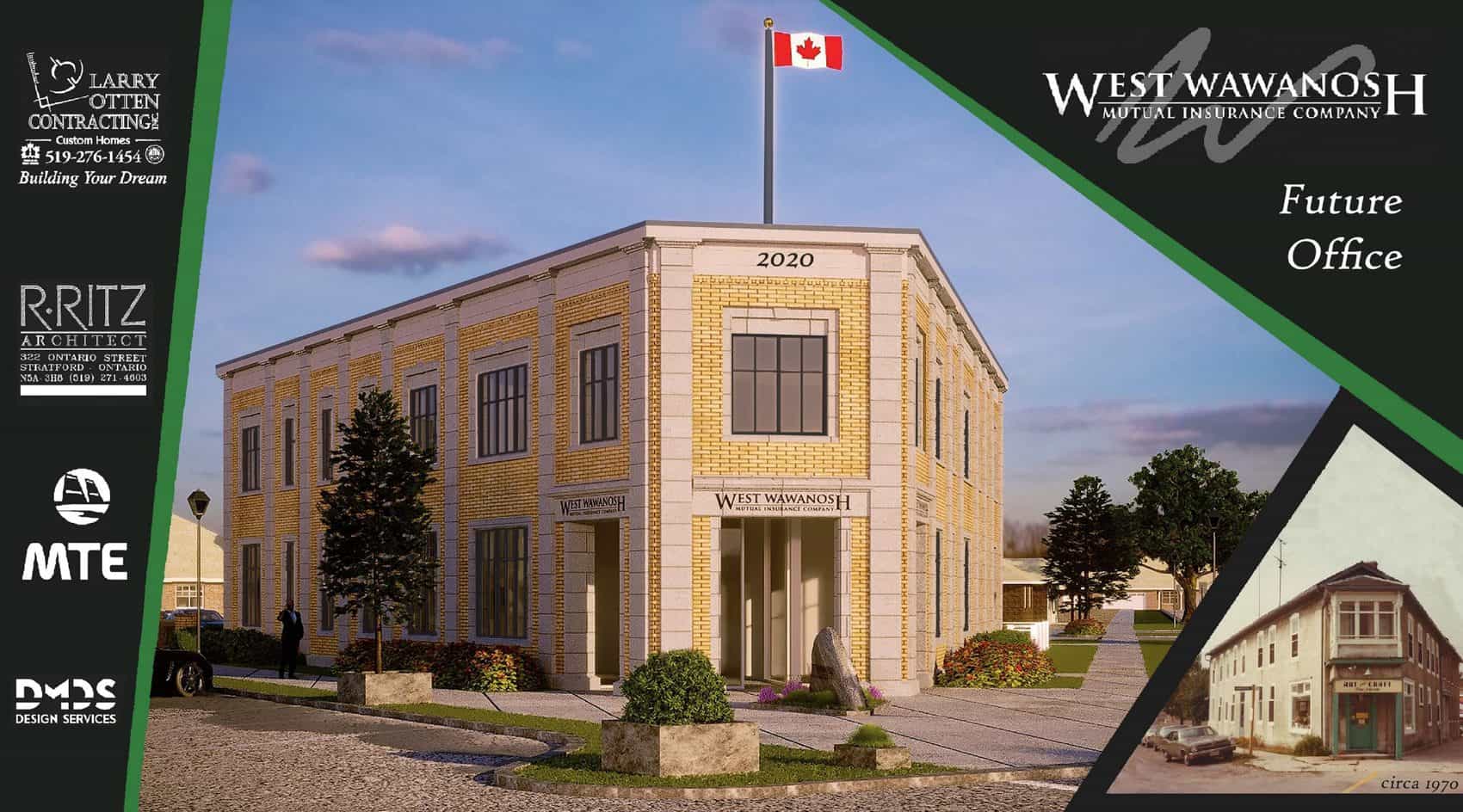 New Office in Goderich, ON 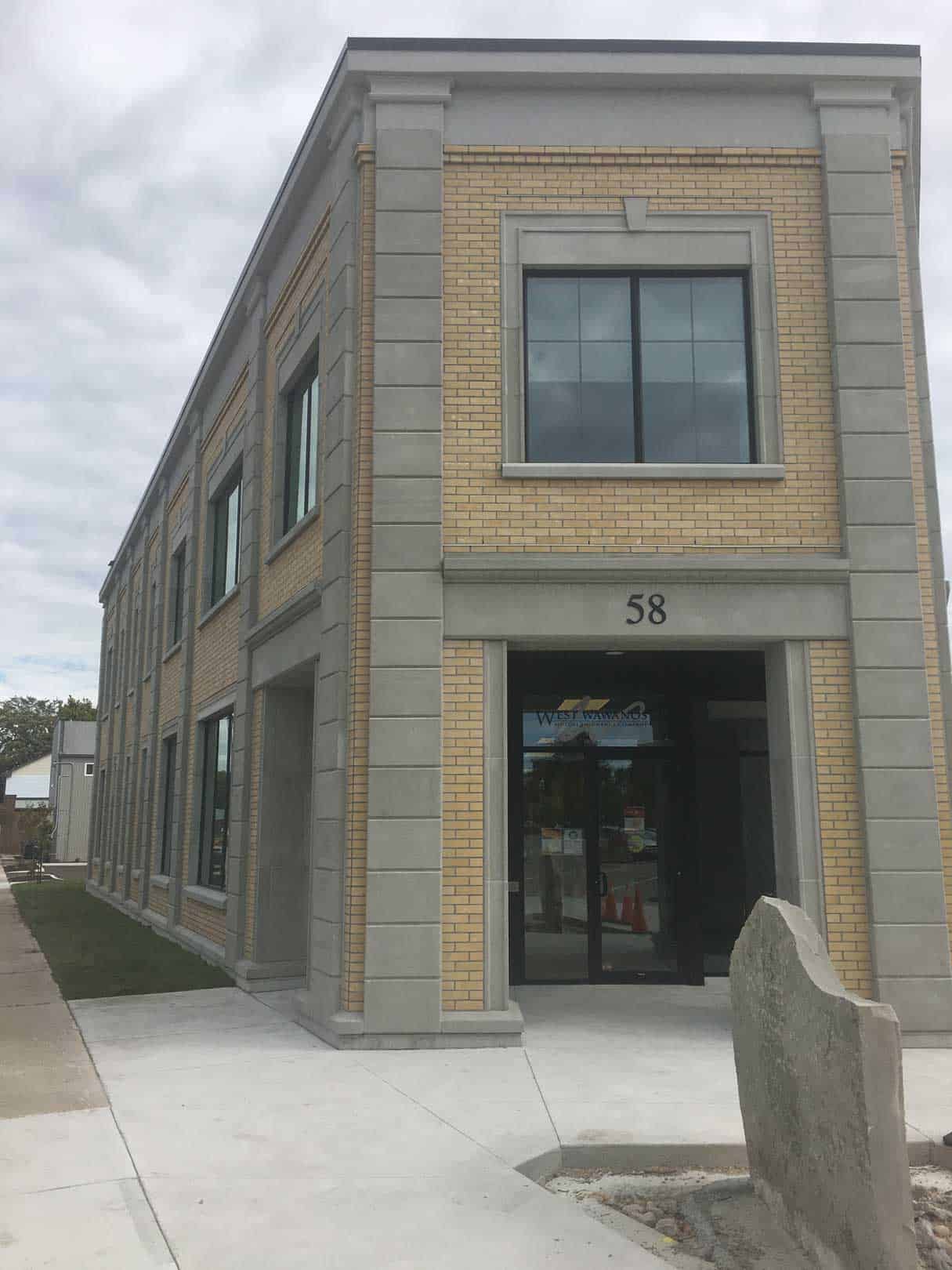 New Office in Goderich, ON

Whether it’s a discussion around your kitchen table, a conversation over the phone or an interaction online, we offer exceptional service that sets us apart.

You won’t find any shareholders here. We're owned by our policyholders. This is the mutual insurance benefit that allows us to offer competitive rates.

As a grassroots organization, we're community focused and dedicated to helping our communities thrive. We give back and support local.

Find an Agent or Broker in Your Community

Serving rural Ontario, our agents and brokers are proud and active members of the community. Our insurance is sold by people who put you first. We believe we are stronger together and we’re here for you.

Find an Agent or Broker

We're here for you.

Life has emergencies. Are you protected?

We understand life in rural Ontario. When it comes to protecting your home, vehicles, farm or business, like you, we prefer to deal with a neighbour, not a stranger. With West Wawanosh Mutual Insurance, you can be assured you’re receiving personalized protection for your residence and property. Contact a broker today to request a quote. We’re here to help you find the best insurance for you.

We’re here for you.

Request a Quote
Find an Agent or Broker

We’re here for you.

We use cookies on our website to give you the most relevant experience by remembering your preferences and repeat visits. By clicking “Accept All”, you consent to the use of ALL the cookies. However, you may visit "Cookie Settings" to provide a controlled consent.
Cookie SettingsAccept All
Manage consent

This website uses cookies to improve your experience while you navigate through the website. Out of these, the cookies that are categorized as necessary are stored on your browser as they are essential for the working of basic functionalities of the website. We also use third-party cookies that help us analyze and understand how you use this website. These cookies will be stored in your browser only with your consent. You also have the option to opt-out of these cookies. But opting out of some of these cookies may affect your browsing experience.
Necessary Always Enabled
Necessary cookies are absolutely essential for the website to function properly. These cookies ensure basic functionalities and security features of the website, anonymously.
Functional
Functional cookies help to perform certain functionalities like sharing the content of the website on social media platforms, collect feedbacks, and other third-party features.
Performance
Performance cookies are used to understand and analyze the key performance indexes of the website which helps in delivering a better user experience for the visitors.
Analytics
Analytical cookies are used to understand how visitors interact with the website. These cookies help provide information on metrics the number of visitors, bounce rate, traffic source, etc.
Advertisement
Advertisement cookies are used to provide visitors with relevant ads and marketing campaigns. These cookies track visitors across websites and collect information to provide customized ads.
Others
Other uncategorized cookies are those that are being analyzed and have not been classified into a category as yet.
SAVE & ACCEPT